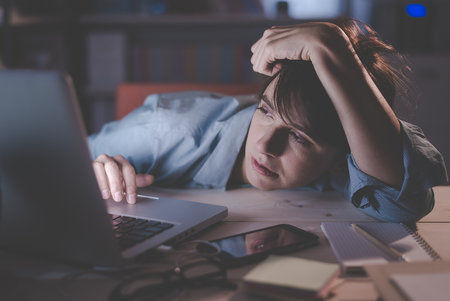 According to recent research, the tendency to work excessively may be associated with issues of anxiety and even disorders such as OCD and other mental illnesses. Diagnostic criteria identify a workaholic as someone who obsesses about freeing up more time to work, ends up working longer than they intended, and uses work as a way to reduce some of their feelings of guilt, anxiety, and helplessness.

In our culture, spending a lot of time working may seem normal and even commendable for some but studies have shown that workaholics have a higher tendency to suffer from serious mental health issues. The University of Bergen in Norway has discovered with its research that a workaholic may be more likely to show signs of disorders like OCD, ADHD, anxiety, and depression than non-workaholics.

Identifying a Workaholic
The study included a total of 16,426 working adults who were tested for both psychiatric and workaholic symptoms. The authors then examined the link between the two issues to see how they were related. While it is understandable that workaholics may experience more stress than the average person, the tendency to experience mental health issues is something that could prove problematic.

Research in the past has proven that workaholics tend to burn out more quickly and even are less productive overall than other workers. Those in the study met the criteria for being workaholics by answering a survey about their preoccupation with work, their use of work to reduce emotional pain, and their tolerance for working long hours.

Workaholics may also be told by others to cut down on work but do not listen or become stressed out if they are prevented from working. Their work may begin to interfere with their ability to engage in leisure activities and it may also begin to negatively affect their health.

These findings could indicate that a person who works excessively may do so as a result of underlying issues of mental health. It is difficult to say however if psychiatric disorders cause problems with work or the opposite is true. The issue could be related to genetic vulnerabilities which could lead to either problem.

Although more research needs to be completed in order to fully understand the relationship between work addiction and mental illness, the study suggested some possible links with OCD. People with obsessive-compulsive disorder tend to try to organize and control things in a way that could possible lead to workaholic issues.

Those with OCD are also more vulnerable to developing addictions which could also explain the link between the two problems. Their addictive symptoms are a kind of coping mechanism that can help them deal with OCD symptoms. Other studies have proven that many obsessive-compulsive traits are present among workaholics such as needing to arrange things in a certain way and obsessing over details to a dangerous point. The study suggests that those with OCD may tend to spend more time working than the average employee because of their mental health issues.