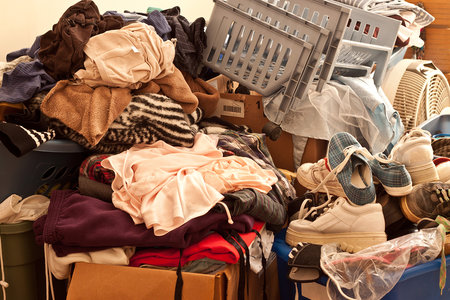 Most people are familiar with hoarders from television programs depicting these individuals who have a tendency to obsessively collect items often to the detriment of their health and lifestyle. Hoarding disorder is a real psychological illness that can lead to many negative consequences without professional treatment.

Although hoarding is still under consideration to be included in the Diagnostic and Statistical Manual of Mental Disorders as its own illness, it is currently viewed as a symptom of several different conditions including obsessive-compulsive disorder. Hoarding is most often associated with anxiety disorders like OCD or post-traumatic stress disorder because symptoms can include anxiety and compulsive behavior at times stemming from a traumatic experience. Hoarding disorder is a unique problem but it is helpful for psychologists to view it as a component of other conditions that can shed light on the cause of the behavior.

Compulsive Behavior and Hoarding
Hoarding is closely connected to obsessive-compulsive disorder, an issue that can present itself in a variety of different ways. The two problems share many of the same characteristics but hoarding disorder has distinct symptoms that can differ from OCD because there are less anxiety and stress involved.

Hoarding disorder, however, can lead to much more family friction and it can be more harmful to the person. They could be living in unhealthy conditions because they have allowed their clutter to accumulate and experience distress when attempting to declutter.

Hoarders often see great beauty and potential in each of the items in their household and are triggered with anxiety at the thought of throwing away anything they have collected. Hoarders tend to fill their living space with various possessions or animals in a way that leads to serious health and safety issues not only for them but for people living with them and even neighboring homes.

Genetic Ties to Obsessive-Compulsive Disorder
Hoarding disorder can be an illness that occurs along with many other conditions but research shows that out of people with obsessive-compulsive disorder 18 to 42 percent experience some compulsion to hoard. Genetics studies have revealed that hoarding is a distinct genetic subtype of OCD based on findings from OCD families with and without hoarding behavior. The compulsion to hoard often starts during childhood or teen years but doesn’t become very severe until adulthood when people have their own living space in which they begin to accumulate possessions.

Like many people with OCD, hoarders are perfectionists and fear making the wrong decision about what to keep or throw out. This is one of the reasons they experience so much anxiety at the thought of throwing things away and end up keeping everything that they purchase. As is the case with many other mental disorders, hoarding is genetic and tends to run in families accompanying other conditions like depression, anxiety, and impulse control problems.

One interesting aspect of hoarding that makes it unique is that individuals with the disorder often do not recognize that they have a problem. They are rarely aware that their behavior is abnormal or problematic for their health until they run into problems with family members or friends and the behavior is finally discussed.

Their compulsive hoarding can become difficult to control and is usually treated in the same way that OCD is although hoarders may not respond as well to treatment as other types of OCD. People with hoarding disorder can be treated with cognitive-behavioral therapy which may be more effective than simply using medications. A therapist can actively enter the hoarder’s home and help them develop healthier habits as they try to de-clutter their living space.