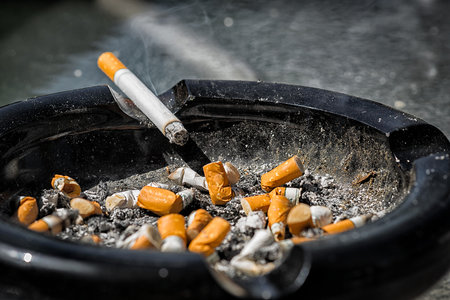 A recent study done on male rats has revealed a strong link between smoking and alcohol addiction. The study done at the Scripps Institute of Research used two groups of male rats to determine if there is a link. The researchers involved in the study have said that the relationship between nicotine and alcohol creates a “vicious cycle” of cravings and rewards.

Both groups of rats in the study were initially given enough alcohol to create feelings of intoxication. The rats drank the equivalent of two beers, or just enough to feel the effects of the alcohol without getting drunk, before stopping. Next, researchers created an alcohol dependence in one group using alcohol vapors.

In about two months, this group of rats were completely addicted to alcohol. The alcohol given to these rats had no limit, so that when they drank, the rats became highly intoxicated with blood alcohol levels three times the legal limit for humans.

The other group of rats were also exposed to alcohol vapors. Researchers also simultaneously exposed these rats to nicotine. The results were startling – the rats developed alcohol dependence in only three weeks, much faster than the first group of rats who were given no exposure to nicotine.

In order to curb their addiction, the researchers then gave both groups of alcohol addicted rats a bitter compound called quinine along with the alcohol to see if the bitter taste would discourage them from drinking. The rats from the first group predictably began drinking less to avoid the unpleasant taste, while the rats from other group who were exposed to nicotine continued to drink at previous high levels.

The researchers then concluded that these nicotine addicted rats continued to drink out of a compulsion to do so. They believe that their compulsion has a lot to do with the pathways in the brain that correspond to stress and reward systems.

The latest findings only add to the mounting evidence that nicotine use is detrimental to a person’s health and can even end up being fatal. Other results from recent studies have proven that regular cigarette use is the second most common cause of death worldwide, followed closely by alcohol use.

In that same year, alcohol was responsible for 4.9 million deaths. Most of these deaths occurred in Eastern Europe, Central and South America, and Sub Saharan Africa.

Now that a definite link has been found between smoking and alcohol addiction, it should be interesting for researchers to begin taking a closer look at how the two combined factors are affecting populations across the globe. Hopefully this new evidence will also make the case against smoking even stronger, and provide more insight into the nature of addiction and alcoholism.