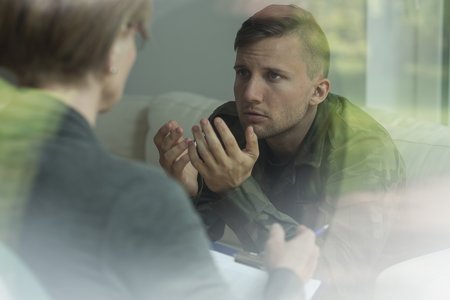 Several studies have strengthened evidence supporting the link between post traumatic stress disorder and substance abuse and alcoholism. Now that we know that there is a connection between the two, it’s important to look deeper into why the two occur together so often and how treatment methods can be tailored to individuals suffering from both.

The most recent surveys show that 35% of men who have suffered from PTSD have also struggled with addiction or alcoholism at some point in their life. Similar findings were discovered among women with PTSD – about 27% had substance abuse or drinking problems at one time or another. The rate of addiction and alcoholism is even higher among both men and women who experience recurrent PTSD. Among this population, 28% of women said they had a drug or alcohol problem and a whopping 52% of men reported that drugs or alcohol were an issue. Compare these numbers to 25% of men and 11% of women without any history of PTSD reporting that they had a drug or alcohol problem.

Post traumatic stress disorder is a mental health condition triggered by the witnessing or experiencing of an event that is terrifying. The most common symptoms include anxiety, uncontrollable flashbacks to the event, nightmares and other sleep disturbances, and depression. The time it takes to cope with the event may take months or even years.

The symptoms will get worse without getting help. The symptoms may start as soon as three months after the event, or may take longer and develop years after the event has happened. If left untreated, PTSD will begin interfering with work, relationships, and other areas of the person’s life. It’s important for a person to get treatment as soon as they begin experiencing symptoms.

Some theories behind why PTSD and addiction are linked.

There is no one explanation for why the two conditions are linked. The following theories can all be true, depending on factors such as age, family relationships, gender, co occurring disorders, and general background. There is still a lot of work to be done for research into the reasons behind the link between addiction and PTSD. More studies need to be conducted in order to discover the factors that put a person at risk. This type of research will help inform more effective treatment and shed some light on how PTSD and addiction interact. In the meantime, here are some of the most common theories.

1. High risk theory:
This theory says that issues with abusing drugs or alcohol already existed before the traumatic event occurred and that it put the person at a higher risk of experiencing or witnessing a traumatic event, and then developing PTSD.

2. Self medication
This theory states that substance abuse is a way that people who already have PTSD use to cope and reduce the symptoms they are experiencing. Alcohol or other depressants may be used to reduce anxiety or help with sleep problems.

3. Susceptibility theory
This theory is similar to the high risk theory in that it suggests a person is at a higher risk of developing PTSD if they are already abusing drugs or alcohol, and then go through a traumatic event.

4. Shared vulnerability
This theory points to a genetic predisposition as the culprit for both PTSD and substance abuse. A person may already possess a genetic vulnerability that puts them at a higher risk for developing both.