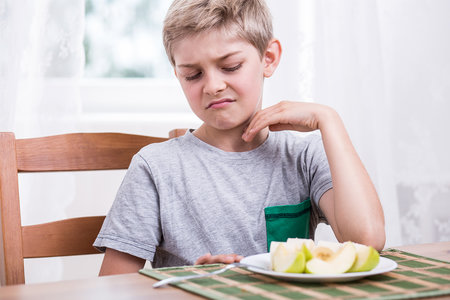 Children can be selective eaters at times as parents struggle to get kids to eat their vegetables or be more open to trying new foods. While picky eating to a certain extent can be common among kids, in more severe cases it could represent underlying issues that may require intervention. New research suggests that selective eating can be associated with psychological problems especially when children’s eating habits cause problems like poor nutrition and conflict within families.

Most parents find their children are picky eaters in their early years but when these problems persist and become an issue that the family struggles with, there could be other psychological issues that need to be addressed. Providing treatment early when these issues appear can help children avoid developing a mental illness later in life.

Normal vs. Severe Selective Eating
Researchers from Duke Medicine in Durham, NC found that selective eating among children in both moderate and severe levels could be associated with psychological problems such as anxiety, depression, and attention-deficit hyperactivity disorder or ADHD. Picky eating at certain levels is so common that clinicians consider it a normal part of development for preschool-aged children.

According to the study published in the journal Pediatrics, between 14 and 20 percent of parents report that their young children aged 2-5 years are selective eaters. While children misbehaving and refusing to eat their broccoli is normal, there are certain cases where selective eating can represent a problem. Selective eating, although very prevalent can be associated with social, emotional and physical domains according to previous research.

For this particular study, researchers analyzed a group of 917 children aged between 24-71 months. The children’s parents or caregivers were interviewed on the children’s eating habits, functioning, possible psychiatric symptoms, and home environment variables.

Anxiety, Depression and Eating Habits
Researchers focused their study on children whose selective eating had become so limited that it caused problems such as impairing their social functioning, health, growth or parent-child relationship. According to the findings of the study, children with moderate or severe selective eating habits were found to be twice as likely to have increased symptoms of anxiety compared to children who were not picky with food.

For many of the children, their selective eating could be attributed to bad experiences with certain foods which could lead to anxiety developing when they are forced to eat the food or try other new foods. Some of the children in the study appeared to have heightened senses that can cause the taste and texture of food to be overwhelming.

For children who experience anxiety when trying new foods, certain forms of therapy could be helpful in reducing the stress they experience when eating. For kids with heightened sense, traditional therapy may not be effective and other types of interventions may be necessary. Children with severe selective eating habits that result in an impairment of function should now be diagnosed with avoidant/restrictive food intake disorder or ARFID, a diagnosis that is being included in the newest Diagnostic and Statistical Manual of Mental Disorders. Children that deal with issues of selective eating should be treated professionally in order to improve their physical health and address any other psychological issues that may be associated with their eating habits.