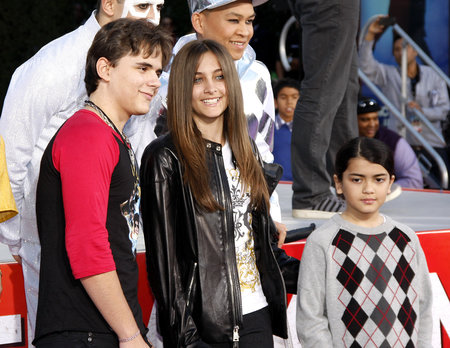 The 17-year-old daughter of the late Michael Jackson recently spoke out against the negativity she receives on social media and the impact it has been having on her. In an Instagram post, Paris shot back at fans and others who she says regularly make demanding requests and criticize her every move.

Paris says fans expect her to reply to each individual comment left on her post and reply with negativity if she doesn’t meet their impossible expectations. The 17-year-old explained that she doesn’t have time to fulfill requests because of a very busy schedule that includes regular Alcoholics Anonymous meetings.

Paris also made a comparison between the expectations fans place on her, and the expectations that were placed on her father, saying that she won’t let the same kind of criticism and negative scrutiny that the late Jackson faced daily get to her.

This most recent incident is not the first time Paris has spoken out on the destructive psychological consequences of being famous on social media. In 2013, she publically admitted that the hateful comments that were regularly being posted on her social media accounts were making her feel suicidal.

Paris was also hospitalized at the time for slitting her wrists in a suicide attempt. It was reported that the teenage girl had made other attempts at taking her own life and the 2013 incident was not the first time.

Paris was diagnosed with depression and sent to a therapeutic facility soon after her release from the hospital. The Diamond Ranch Academy in Utah is solely for teens between the ages of 12 and 18 who are in need of specialized mental health care.

Paris’ mother Debbie Rowe and grandmother Katherine Jackson made the decision to send the teen girl to the school to help her get back on her feet. Katherine Jackson had spoken in the past about the difficulty Paris was having in dealing with her father’s tragic death. Katherine and Rowe feared that exposure to social media was doing more harm than good for the young girl.

It appears that Paris is still dealing with the exposure that social media brings, and is handling it by speaking directly to fans and followers. Her recent remarks reveal that the scrutiny that being on social media brings is still an issue for her and that she continues to be vulnerable to comments made by followers. The 17-year-old’s remark about attending 12 step meetings reveals that she is making progress in healing her life and moving forward in health and recovery.

Paris’ father Michael Jackson faced similar pressure from fans and the public during his long and prolific music career. Jackson worked under an enormous strain up until the final days of his life. Before his death in 2011, Jackson rehearsed for hours for an upcoming tour that was intended to be a big comeback for the singer.

AEG, the company hosting Jackson’s tour, had hired Dr. Conroy Murray for Jackson. Murray was later convicted of involuntary manslaughter for administering the powerful anesthetic propofol that led to the singer’s death. Jackson’s son Prince revealed in a testimonial that his father was incredibly stressed about the tour and the demanding schedule that went along with preparing for it.