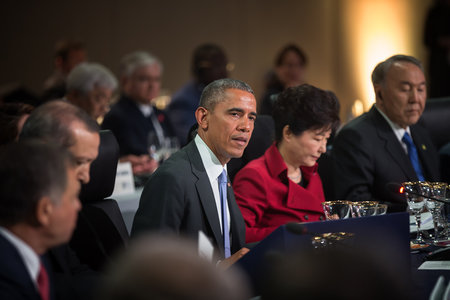 President Obama has attempted to address the widespread problem of opioid addiction which has reached epidemic proportions in the United States. He recently unveiled a new plan to combat the addiction that would emphasize the importance of making rehab programs more available to people of all income levels.

His hope is to begin reversing the recent surge in overdose deaths that are linked to heroin and prescription painkillers. Obama made an announcement about his new plan as part of a speech he delivered at the National Prescription Drug Abuse and Heroin Summit in Atlanta.

Obama asserted that he would increase spending to fight addiction and treat the problem as a health issue affecting America rather than a criminal issue to come down on. He has spoken about opioid addiction in the past but in his last year in office he plans to make important changes to reduce increasingly high rates of prescription substance abuse.

Discussion on Addiction and Treatment
The National Prescription Drug Abuse and Heroin Summit is a four day gathering of politicians, physicians, researchers, counselors and educators to discuss issues of abuse and addiction and offer solutions. The summit has been held annually since 2012 when the Centers for Disease Control and Prevention first declared opioid addiction as a public health crisis.

At this year’s summit, President Obama was on a panel with two recovering opioid addicts and Baltimore’s health commissioner. The panel was put to together to discuss addiction and treatment and was moderated by Dr. Sanjay Gupta, a medical correspondent and practicing neurosurgeon.

At the summit, Obama spoke often about the importance of ceasing to criminalize problems like opioid addiction and treating them as health problems rather than a fault of character. He acknowledged that previous drug epidemics were heavily policed and largely seen as inner city problems affecting minorities rather than the nation as a whole.

Increasing the Budget for an Epidemic
The image of drug addiction as a problem mainly among minorities or people living in the inner city is no longer valid. Opioid addiction has reached everyone in the United States and is now considered a national health issue rather than a problem for a specific group. Obama said that because of this change, criminalizing or incarcerating people with addictions is not an effective option.

Congress has already made efforts to combat these alarming numbers by increasing spending by $100 million to help fight the epidemic. Obama is now seeking an additional $1.1 billion as part of the president’s 2017 fiscal budget to continue to expand treatment programs for opioid addiction.

Obama hopes to expand access to buprenorphine, a medication that helps decrease cravings and withdrawal symptoms for people quitting opioids. Doctors are currently limited to prescribing the drug to 100 patients but the Obama Administration hopes to double that limit.

Obama acknowledged the powerful connection between drug abuse and mental health and hopes to address these issues as part of a solution for the epidemic. He said that curbing the demand for these drugs is one of the most important things we can do to reduce the addiction epidemic.