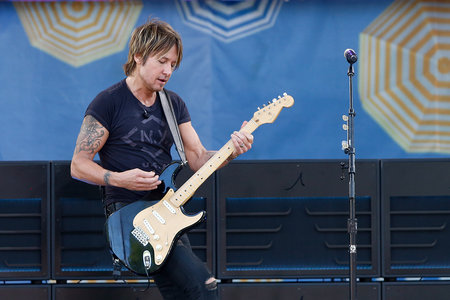 Keith Urban was born in New Zealand and grew up in Australia, starting guitar lessons after a flyer was hung up in his father’s convenience store. From those humble beginnings, he has grown to a very successful country musician with 14 number one hit songs and many awards and accolades.

His live shows are characterized by high levels of energy, and he has also appeared as a judge on American Idol. He is also known for battling and overcoming addiction, having been sober since 2006. Like many people with addiction struggles, it was something passed down through family.

In a recent interview, Keith opened up about how his father, Robert Urban struggled with alcoholism and was often cruel and abusive, and how that impacted his own journey in addiction and sobriety.

Growing Up:
Robert Urban died after a long battle with cancer in 2015. At the time, Keith spoke highly favorably about their relationship. He told The Tennessean that his father was “the catalyst” that started his career, and was very supportive of his son’s musical career, sewing his stage clothing in his youth, and encouraging him to go to America.

Without discounting any of the positive things his father did, Keith has now opened up about how he was often a hard man to live with, because of his own problems with alcoholism. In an interview with Erik Hedegaard for Rolling Stone, he called his dad a strict “physical disciplinarian.”

Reflecting on how he has had to come to terms with his abuse, he said that “Ten years ago, I would have said, ‘He never did anything I didn’t deserve.’ Now I realize it’s not about deserving it.” Aside for the direct abuse, his father didn’t give him a lot of affection or direct encouragement. In fact, Urban told Hedegaard that ““I don’t recall him ever telling me he loved me as a kid,”

This is a common path for people who endured less than ideal childhoods, or grew up with parents with substance abuse issues or who mistreated their kids. The children who have endured such traumatic experiences and a betrayal of trust protect themselves by minimizing, denying, or rationalizing what happened.

They make it seem like a smaller deal to protect their brains from absorbing the full impact of the pain. Only with a lot of time, do they gain the courage and progress in their healing enough to be able to grasp this part of their truth. That is why the healing and recovery process of self-discovery and self-growth is a lifelong one.

Starting a New Life:
In the early 1990s, Keith Urban moved to Nashville to try to launch his musical career further. Speaking on the Oprah Winfrey Show in 2010, he said that he had many encounters with loneliness and rejection, and this caused him to turn to alcohol and drugs.

They offered him a diversion from all the negative emotions he was experiencing. Another motivation was reported by Star magazine that reported that, as a recent immigrant in a country music scene that was a very tight knit circle of “hat acts,” Urban was desperate to fit in. He found his circle of people among people who partied aggressively, drinking heavily and using harder and harder drugs with Keith doing everything he could to be accepted.

Keith Urban checked into rehab three times to battle addictions to alcohol and cocaine. The first time was in 1998. He relapsed several times, but continued to pursue his own recovery and struggle with the healing process. His story is a very common one of an extensive struggle with cravings and addiction, needing to try several times and not giving up, so that the road to sobriety remains a lifelong focus.

Recovery:
Urban credits his wife, actress Nicole Kidman with helping him realize his need for sobriety, and entering the program that finally stuck for him. He entered rehab for the last time in 2006, and continues to work on his sobriety, learning to love himself while at the same time working on strengthening his relationship with his wife.

At a 2010 concert attended by almost 15,000 people, Keith Urban loudly proclaimed that the love of his wife was what saved his life and pulled him out of the clutches of addiction. His addiction may have caused the collapse of his first marriage, but he was able to find support with Nicole, and says that “I was spiritually awoken with her,” and that her encouragement made him feel like “for the first time in my life, I could shake off the shackles of addiction.”