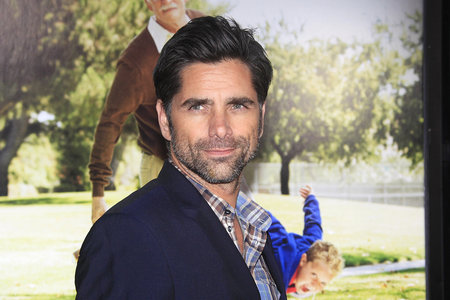 Sitcom star, John Stamos has been candid recently in discussing some of his troubles with substance abuse in the past few years. During an interview with Howard Stern, Stamos opened up about a number of aspects of his personal life including his battle with alcohol, quitting ambien and recovering from some painful events.

Stamos told Stern that he now has nothing to hide in terms of his substance use after spending some time in rehab. Now completely sober, the actor says that he doesn’t miss drinking or getting high at all. Now starring in a new show on Fox called “Grandfathered” as well as a Full House revival for Netflix, Stamos is free of his demons and is experiencing some positive changes in his life and career.

Going Down a Dark Path
Stamos explained in his interview, that throughout his life he never had a difficult relationship with alcohol and could always stop drinking whenever he needed to for work. However, things took a turn for the worse after his mother passed away in 2014, a circumstance that hit him very hard. Stamos slipped into a darker place and began to lose his sense discipline and morals that he had always had since childhood.

Things came to a head this summer when he was arrested for driving under the influence and sentenced to three years of probation for the charge. Stamos admitted that the DUI was horrific and embarrassing, realizing that he could have seriously hurt someone. It was after this incident that he finally understood that he had to stop his ups and downs that came along with the cycle of drinking. He entered a 30 day substance abuse program in July and has been completely sober since.

Breaking Free from Substance Abuse
The actor was determined to make permanent changes when he entered rehab and was willing to do whatever he could to make sure he would make it work. Stamos said the main issue that caused his substance abuse was the death of his mother – a tragic event for him that derailed him completely. His relationship with his mother was so strong that he felt a piece of him was gone, and he lost the sense of purpose that he had of just being there for her and being a good son. The pain he experienced of losing his mother caused his drinking to escalate.

The actor also revealed that he managed to quit taking Ambien, a medication he relied on to help him sleep every night. His use of Ambien was causing memory issues for him, making it difficult to memorize scripts and even remember simple things like names of people and places. Although it was hard for him, he is grateful to no longer be taking medication like Ambien or anti-depressants of any kind.

In spite of the death of his mother, his divorce and his DUI charge Stamos says that he is now in a much better place in his life. He has gotten rid of many of the ups and downs that he used to experience when he was drinking heavily and taking medication. He now feels his emotions are even most of the time and he has been able to work hard on his new television roles. His substance abuse issues were something that built up over a period of time and brought him down, almost affecting his career. Luckily, Stamos has been able to overcome his issues with drinking and can enjoy his revitalized acting career from a more stable perspective. Sobriety has been a very positive change for the actor who prefers being free from any substance use in his life.