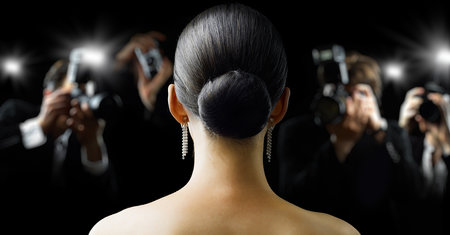 A leading pediatrician in the U.K. blames the rise in eating disorders among young people today on the media’s obsession with celebrities and their bodies in particular. In recent years, exposure to the lives and bodies of celebrities has saturated the media even more. The result of this focus has had a profound effect on the way young people, and young women in particular, view their own bodies.

The pediatrician making these claims is Dr. Colin Michie, who is also chairman of nutrition at The Royal College Of Pediatrics And Child Health in the U.K. He says increased usage of smartphones and the omnipresence of advertising is to blame for the recent spike in eating disorders. Young girls and women in particular are able to access images of overly thin celebrities anytime they wish, and are exposed to those images even when they go about their daily lives.

Traditionally peer pressure, feelings of low self esteem, anxiety, depression, or not having control over one’s life were factors that contributed to the development of an eating disorder. The media’s portrayal of bodies also played a part, but it seems that its influence has grown in recent years with the widespread use of social media, smartphones, and the Internet in general among young people. Michie believes that advertising is a “very powerful force” that has far reaching effects that we may not fully understand or even be able to control.

In England and the United States, the number of children and young adults in treatment for eating disorders has risen dramatically. More than 90% of these patients are girls or young women. The most common disorder among these patients is anorexia nervosa with inpatient treatment required. Even though females continue to make up the majority of patients admitted to hospitals and treatment centers for eating disorders, the number of males seeking treatment has risen sharply.

Other statistics for eating disorders include a 172% jump in patients seeking eating disorder treatment at English hospitals and treatment centers since 2003. The rise among girls seeking treatment also saw a similar sharp increase in the last decade.

While doctors like Richie blame the media for the alarming increase, other experts in the medical field believe there are other factors at play. Some believe that delays to getting quality health care, and the resulting damaging effect on health they have on patients are to blame.

Others say that doctors today are better at recognizing the symptoms of an eating disorder and diagnosing the risks than ever before. The higher rate of detection of eating disorders is what’s really behind the sharp increase in patients seeking treatment, not increased exposure to the media. Limited access to treatment for eating disorders in their early stages could also be to blame, as patients are only able to get help when their symptoms have become more severe.

The factors contributing to the recent rise in young people seeking treatment for eating disorders is probably more complicated than we think. A combination of increased exposure to the media, images of overly thin celebrities, health care access, and the ability of doctors to quickly diagnose disorders should all be taken into consideration.

Young people today are definitely more aware of the role of image and what goes on in the lives of celebrities, but they are also more educated than ever about eating disorders and the dangers they pose to health.