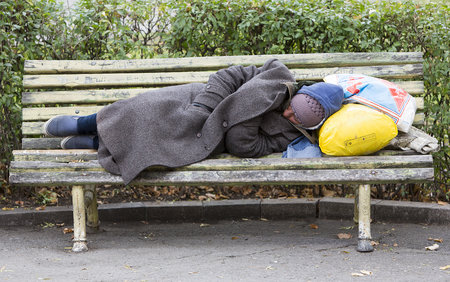 Homelessness is a major issue in the U.S. with several American cities such as Los Angeles and New York City considering the problem an epidemic in their area. The rates of homelessness in the country continue to rise every year with recent polls showing more than 600,000 people without homes and about 1.6 million using transitional housing or emergency shelters.

One issue that makes the epidemic of homelessness more complex is the reality that a significant portion of the homeless population suffers from either a mental illness, an addiction or in many cases a combination of the two. A dual diagnosis of both a severe mental illness and a substance use disorder occurs in about 10 to 20% of the homeless population.

This is an extremely vulnerable subgroup with complex issues and often poorly understood needs. While many homeless people may find it difficult to get back on their feet, those with a dual diagnosis have extra challenges that need to be addressed in order for them to improve their situation.

Providing Services to Dually Diagnosed Homeless
It is common for homeless people not only to have mental illnesses or substance use disorders but also general medical illnesses, legal problems, histories of trauma, behavioral problems and inadequate support systems. It can be difficult to assess the homeless and know the true extent of how these problems affect the population as a whole. Many service systems also tend to view clients in unidimensional terms as either mentally ill or chemically dependent rather than addressing the complicated realities of co-occurrence that are so common.

Substance abuse as well as housing instability and homelessness have increased dramatically among people with a severe mental illness. As dual diagnosis has been studied more in depth and further understood in the field of addiction treatment there have been more integrated models developed to treat both mental illness and addiction simultaneously. These dual diagnosis treatments have not yet been specifically applied to homeless persons and many substance abuse models intervening in the homeless population have failed to accommodate those with a dual diagnosis.

Common Issues in Homeless Individuals
Dual diagnosis can be a devastating problem for any individual but it can have a deep impact on people surviving without homes. One third of homeless people have a debilitating mental illness, 30 to 40 percent have alcohol problems, 10 to 20% of them have issues with other drugs and 10 to 20% of the homeless dually diagnosed with a severe mental illness and an addiction to alcohol or other drugs. A dual diagnosis can take a variety of different forms in terms of the type of mental illness and the form of addiction that occurs in connection with it.

Studies have found that the rate of schizophrenia was 9 times as high in homeless alcohol-dependent persons compared with a household sample of alcohol-dependent persons. Bipolar disorder was also seven times as prevalent in homeless alcohol-dependent individuals compared with a household sample. Reports have also shown that dually diagnosed people are particularly vulnerable to housing instability and homelessness. Many dual diagnosis patients experience temporary homelessness after being discharged from a treatment center particularly those suffering from schizophrenia and an alcohol addiction.

Homelessness is a difficult problem but the subgroup of dually diagnosed homeless need special attention and care. Individuals with a dual diagnosis often have longer durations of homelessness than other subgroups. They are also more likely to experience psychological distress, be picked up by police or incarcerated and more likely to become isolated or resist accepting help. Many of the homeless have serious challenges to overcome in order to become a part of society again but dual diagnosis is one of the most severe problems that can create a significant obstacle for the homeless population.