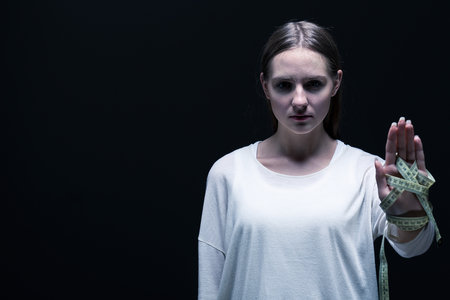 People with anorexia develop certain habits when they decide what to eat and researchers have found that when they are involved in choosing food they are using a part of their brain that is closely associated with addiction and habitual behavior. If an individual has vulnerabilities toward addiction it is not surprising then that they may struggle with both anorexia and a habit of substance abuse.

Brain Activity and Food Choices
The study was conducted at the Columbia University Medical Center with the findings published in the journal “Nature Neuroscience”. Researchers are working to more deeply understand anorexia, a complicated illness with a mortality rate that is the highest of any psychiatric disorder. One of the notable features of anorexia is the individual’s persistent selection of low-calorie, low-fat food even when they are trying to recover.

In the study, researchers used magnetic resonance imaging to track activity in the brain in real time. They used this technology to monitor 21 women with anorexia and 21 health individuals as they made a series of choices about what foods to eat. Throughout the study, the women with anorexia consistently chose fewer high fat foods and also used different brain regions than other people in the study to choose those foods. As the individuals with anorexia nervosa made choices about food they activated the dorsal striatum, a region of the brain that is related to habitual control of actions. Activation in certain parts of the brain also predicted how many calories they chose to consume the following day.

Treating Anorexia and Addiction
The findings of this study provide the first objective data to link abnormalities in brain activity with the kinds of restrictive food choices that are so common among people suffering from anorexia. This new knowledge about brain activity associated with anorexia could open up new forms of treatment development and lead to a better understanding of the disease mechanisms.

The study has even led some of the authors to begin developing a type of psychotherapy intervention that is built on principles of habit reversal so that patients with anorexia can change some of their behaviors. Since it is clear that their food choices are associated with habitual behavior in the brain, certain techniques that target actions of habit may help to reduce restrictive eating patterns. A better understanding of the brain mechanisms associated with anorexia may also lead to new medication targets that would help reduce symptoms of the eating disorder.

Because the study proved that anorexia symptoms are associated with addiction in the brain, the finding may open up new opportunities for dual diagnosis treatment. Individuals with both substance abuse or addictive behavior and anorexia are most likely making choices related to excessive activity in the dorsal striatum. Understanding the brain activity associated with anorexia can also help researchers learn more about how abnormal activity could be linked to any related disorders.

Decision making processes could be the key to understanding both anorexia and addiction as both problems are connected to certain habitual actions. As researchers learn more about how brain circuits for decision-making contribute to anorexia and addictive behaviors they can improve treatment for patients with both problems. Although the findings are promising, more research needs to be completed in order to advance our understanding of the complicated causes of eating disorders like anorexia and how it is associated with addiction.