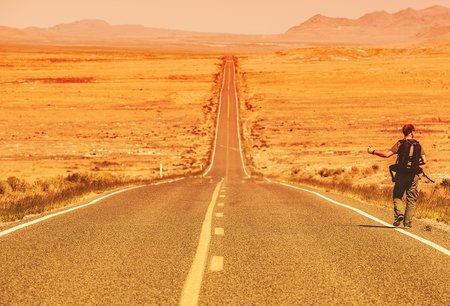 Chris Bailey has created a project that tells his personal story of addiction and will inspire others who have been through many the same struggles to turn their lives around. Bailey was once homeless and battling a drug and alcohol addiction but as a part of his recovery he decided to walk all the way across the country from Los Angeles to New York. He calls his project “Step into Life” and it is a mission he created for himself to trek across America, meet other people, spread love and talk about hope in alcohol and addiction recovery.

Bailey is supported by his twin brother, Bobby who helped him kick his habits and enter rehab treatment. Chris has now been clean for 14 months and has used his journey across America as a chance to reflect on his own addiction and talk to others about their experiences with recovery.

Saved from a Deadly Addiction
Bobby and Chris were close until around the age of 20 when Chris started getting involved in drugs and lost contact with his brother. Chris became seriously addicted to methamphetamines along with a drinking problem that got so bad he ended up homeless and living on the street. He finally hit rock bottom when the police performed a street sweep of the area he was living.

While running in the dark from the authorities he fell over an embankment, injuring himself and bleeding profusely from a deep cut in his forehead. Chris had nowhere to turn until two days later his twin brother who he hadn’t spoken to in years, miraculously found him in a park. His brother helped him get clean by staying in a hotel with him for eight days and entering him into rehab in Los Angeles. Bailey enjoyed walking to his twelve step group to help him gather his thoughts, sometimes walking 10 miles to attend a meeting. This gave him the inspiration to do a cross-country walk that would help him connect with other addicts and alcoholics.

Traveling for Himself and Others
Chris chose to walk across America as a way to face his fears, stop numbing his emotions and talk more openly about his addiction. He used a tent for shelter and survived off of generous donations from strangers at times including sneakers when his first two pairs wore out. He says that his journey helped him do something to connect with people, God and to get rid of everything he had built up inside. It was a way for him to be alone and honest with himself which was not easy to do. He broke down at times but eventually became more in touch with his own emotions and connected with himself. Throughout his travels, Bailey spoke to high schools and stopped by treatment facilities to connect with people still struggling with addiction. He says that he felt an enormous connection with people and experienced an overwhelming amount of love from everyone he met.

His brother, Bobby, helped document Chris’s journey through film and photos to share the experience with others. The twins now have an organization called “Hold Space” which is symbolic of the hope and love Bobby held for him when he was still in the midst of an addiction. The organization currently has a campaign against prescription drug abuse especially for teens that often end up addicted. They are speaking with youth across the country and working with families to find alternatives to narcotic painkillers. Chris Bailey’s experience with recovery has inspired him not only to change himself from the inside but to actively work against addiction in his community.