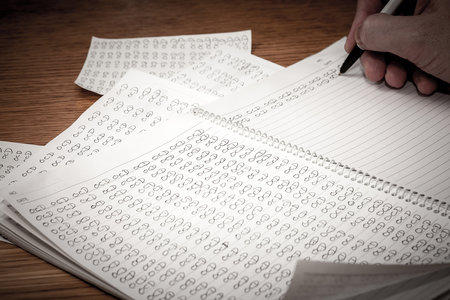 A person who has been diagnosed with obsessive-compulsive disorder will have repetitive, unwanted thoughts or obsessions that create feelings of severe anxiety. They will also engage in repetitive behaviors in an attempt to dispel the uncomfortable feelings caused by the thoughts. Their behavior will begin to interfere with life responsibilities, such as work, school, or relationships. The most common things that cause obsessions for a person with OCD include perfectionism, contamination, threats of danger, and rules of morality. Behavior that is performed in reaction to these thoughts can include repeatedly checking on things, cleaning, reviewing thoughts, performing actions over and over, and asking others questions.

An eating disorder is characterized as a preoccupation with body image, weight, and eating. Someone with an eating disorder may also have repetitive thoughts or behaviors that reinforce their fear of gaining weight. Some repetitive behaviors include performing rituals when preparing or eating food, calorie counting, purging, or skipping meals. The obsession with weight gain and body image is the common factor among all eating disorders, including anorexia, bulimia, and others.

There are some basic similarities between OCD and eating disorders that can make it difficult to distinguish between the two. The obsessive thoughts, the rituals performed on a daily basis, and the ability they have to eventually take over a person’s life are the characteristics the two disorders have in common. Rituals surrounding eating and mealtime can be especially confusing when trying to determine if a person has OCD or an eating disorder.

Also, the reasons for both OCD and eating disorder behaviors can be very similar, with perfectionism, extremely high standards, guilt, and an unrealistic sense of responsibility experienced by individuals who suffer from both disorders. It’s important to look deeper into the sources of the behavior in order to determine what disorder is at the root of the behavior.

There are times when a person can have both disorders, and that’s when treatment can get a little tricky. In these cases, the more severe disorder is treated first in order to minimize any health risks that are putting their lives in danger. This usually means the eating disorder will be treated first because the risks associated with poor nutrition are too serious to ignore. Treatment can then include exposure and response prevention to treat both disorders. There is no standard approach to treatment for OCD and an eating disorder, but it will commonly involve this type of therapy or another approach depending on the patient. The ERP type of treatment can also be used in conjunction with medication and cognitive behavioral therapy to treat a person with OCD.

On the other hand, eating disorder treatment can include a variety of therapies and calls upon the expertise of various health professionals, including nutritionists, physicians, psychiatrists, therapists, and family therapists when needed. Depending on the needs of the individual, different types of therapies will be used.