Since Demi Lovato was a young child she has been working toward her dream of becoming a successful entertainer. What she didn’t know is the intense pressure of fame that comes along with it. Through her years as a child/ teen actress and singer she has faced many triumphs as well as hardships. 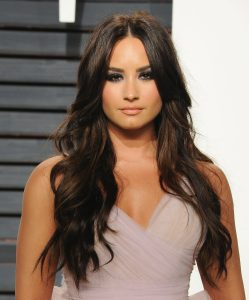 Demi was introduced to cocaine at 17 years old by people she was working with. At the time she was working on the set of ‘Sonny with a Chance’ a Disney Channel show that she had a leading role in. They all expected her to party since she was famous. She also struggles with Bulimia, an eating disorder.

She recently decided to open up about these hardships she has faced along the way through her new Youtube documentary called ‘Simply Complicated’.

She feels as though she was pushed into being a world wide roll model before she was ready for such a big responsibility. She was preaching sobriety while on drugs. Now, she has made the choice to come clean about her mistakes and show the world who she really is and who she wants to be, in hopes that this can help inspire her fans who can grow from this.

A few years back, many girls from all over as well as Demi thought that in order to be beautiful you had to be as skinny as possible. It was “Chic” to look that way, she said. After being bullied in school Demi said thats when the eating disorder developed.

She recently posted a photo on instagram, showing how she looked before and a current photo of herself. The difference is incredible. She has grown into a healthy, fit body and has remained sober through it all.

Her new documentary is very personal and covers so many details that we would have never known. The director, Hannah Lux Davis focused on bringing out her struggles as well as achievements. Narrating the true road to recovery and the daily struggles that came with it was the ultimate goal.

Her cocaine addiction spiraled out of control at a young age. While she was 18, she went to rehab for the first time in 2010. This experience was a failure because she was simply not ready to get sober yet.

She admitted to faking drug tests and lying to her fans. She was pushed into preaching sobriety even though she had still been using.

“We were in New York, and she clearly was on something, and she was on air promoting this new way of life, and I was like, ‘You’re so full of it,’” her manager Phil McIntyre says in the documentary. 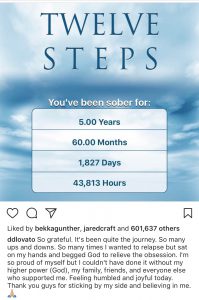 The issue grew worse. Demi created a scene in a psychiatric unit but it still wasn’t enough for her to want to change.

Her rock bottom was an American Idol performance when she showed up hungover after throwing up in the car service on the way there. She admitted that it was a time in her career that she just didn’t care. Since then, she has decided to get help and work toward her long term recovery.

Demi has now been sober for 5 years, and is continuing efforts to support her fans going through the same thing.

Her new 90 minute documentary can be watched at: https://www.youtube.com/watch?v=ZWTlL_w8cRA