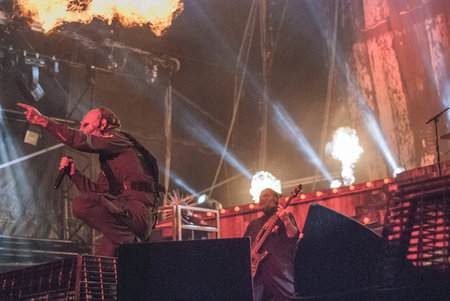 Corey Taylor is the highly esteemed vocalist and frontman for the alternative metal bands Slipknot and Stone Sour. He is widely praised as a talented singer, with a five and a half octave range few in popular music can match. In both groups, his talent and power as an intense and attention-gaining singer have created music high in energy and intensity.

Like many passionate and talented artists, Corey Taylor also struggled with addiction. Struggling with cocaine, amphetamine abuse, and heavy drinking from a young age, through a lot of his career. However, with a lot of work on his part, Corey Taylor has been sober for ten years. Like many people struggling with addiction, it was relationships, friendships, and the inspiration from others with other people that was the main catalyst in helping him become courageous enough to make that life-changing decision.

The Story:
Taylor told his story as part of “Epic Rock Tales,” a series of animated videos presented by the music media outlet Loudwire. He was smoking tobacco and marijuana at 12 years old, and then abusing amphetamines and cocaine by thirteen. “By the time I was fifteen, I had OD’d twice,” including one time when he woke up in a dumpster. His story was an all too common one of a life overcome by drug use, which started for him at a young age.

When he was at home, recovering from a serious overdose, he saw the experimental rock band Faith No More play their song “Epic” on television, and was inspired. “It was so good, so powerful, and so different from anything I had ever seen.” It was that inspiration that motivated him to create music again, which had been abandoned in the haze of his addiction.

Aftermath:
Many people addicted to one substance can think they are sober, but in fact move their addiction over to another substance. This was the case for Corey Taylor, who continued to have serious alcohol abuse issues, starting his alcohol consumption early in the morning, and not stopping until a blackout. His heavy drinking would further make him behave in deeply destructive and suicidal ways.

In 2003, he almost jumped to his death off a hotel balcony, brought back by his friend Thom Hazaret and his then-wife Scarlett. He considered this his lowest moment, and this led him to find sobriety in 2006. He then spent a year he called “the worst year of his life,” that he spent in “self-imposed isolation.”

This time of self-reflection helped him to rethink his life, and learn to define himself independent of his hard-partying persona. “I had to figure out who I was without that, and it took me a long time.” Stone Sour’s 2006 album Come What(ever) May was his first recording made in sobriety, with the songs “Socio” and “Zzyzx Road” addressing his struggle directly.

Dual Diagnosis:
In addition to addiction issues, Corey Taylor also struggled with depression, and has spoken openly about it to the You Rock Foundation. He described his substance abuse and self-destructive habits as “wrecking myself” as a way of trying to deal with “the anger and sadness [that] was starting to bubble up into other areas.”

This is not uncommon, and is referred to as a dual diagnosis, where a person struggles with addiction and a mood disorder at the same time. Many people with intensely sad or frustrated feelings often turn to alcohol or drugs as a way of “self-medicating” and dealing with the pain, but then find their use only ends up making them feel worse in the long run.

Corey Taylor’s journey out of depression and addiction is a deeply inspiring one, and it is especially admirable that he is so open about his struggles and recovery. Hopefully, his story can inspire others, just as Faith No More once inspired him and motivated his change.