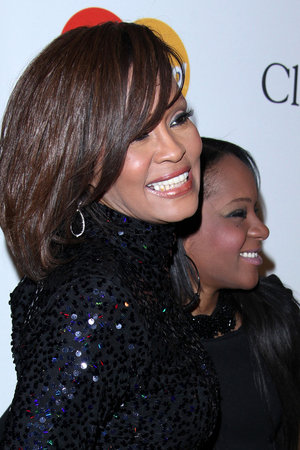 Fans and family members have been concerned about Bobbi Kristina Brown ever since her mother, singer Whitney Houston, was found dead in 2012. The sudden and unexpected passing of her mother hit the 18 year old hard. She had been close to her mother and was often seen by her side at concerts and events, ranging from television appearances to red carpet events.

Bobbi Kristina grew up very much in the public eye, and fans of both her mother and father, singer Bobby Brown, watched as the young girl grew up into a young woman. Even after the marriage between Houston and Brown dissolved in 2006, Bobbi Kristina remained close to her mother and continued to make public appearances with her, even singing alongside her mother at a 2009 concert in Central Park.

The young woman had many of the same interests as her mother, including singing, dancing, and even acting. Bobbi Kristina also seemed to share some of the same demons as her mother and this became even more apparent after Houston’s death.

Houston and Brown’s struggles with substance abuse were well documented, as well as the domestic violence that went on in their relationship. As the only child of the couple, Bobbi Kristina no doubt grew up witnessing firsthand the turmoil caused by her parents’ rocky marriage and drug use.

After Houston was found dead in a Beverly Hills hotel bathtub in 2012 from an apparent drug overdose, family members grew concerned about how the young woman was handling the tragedy. The 18 year had apparently started drinking and abusing drugs herself, and had to be hospitalized a couple of times shortly after her mother’s death. Family members also reportedly discovered Bobbi Kristina using drugs in a nearby hotel room shortly after her mother’s funeral.

Other odd behavior had both family members and the paparazzi focused on Bobbi Kristina during this time period. When the she announced an engagement to Nick Gordon, a young man that had lived with the Houston’s since he was 12, fans of Bobbi Kristina were surprised and certain family members were not supportive of the relationship.

Bobbi’s grandmother criticized the relationship as being “incestuous”, and others noted that there was drug use and even physical abuse occurring between the couple. Bobbi Kristina and Nick Gordon announced their marriage in early 2013, and their relationship followed an eerily similar path to the one between Whitney Houston and Bobby Brown. It was later discovered that the two had never officially married.

In January 2015, Bobbi Kristina is discovered unconscious in a bathtub by Nick Gordon and a friends of the couple at the 21 year old’s townhome. Repeated efforts to resuscitate her were unsuccessful and she was rushed to the hospital.

The final cause of Bobbi Kristina’s death has not yet been determined and no criminal charges have been filed against Gordon as of August 2015.