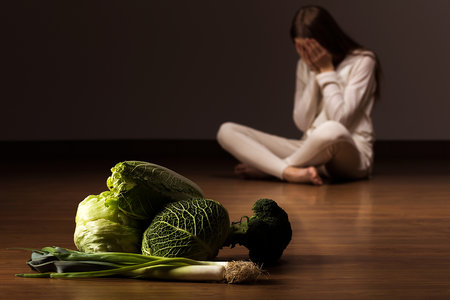 Many eating disorders start with an intention to lose weight, get in shape, or make some other improvement to one’s appearance. These good intentions, however, can quickly spiral into a full blown disorder such as anorexia, bulimia, or binge eating. While it’s not quite clear why certain people are more prone to eating disorders than others, there is a definite link between depression and eating disorders. One study revealed that almost a quarter of patients with bipolar disorder also had an eating disorder. The same study showed that almost half of the same group of patients controlled their eating habits in some way.

When it comes to binge eating disorder, almost 50% of patients diagnosed with the disorder also have a history of depression. Binge eating also happens to be one of the most common eating disorder affecting adults in the U.S. today. Anorexics also struggle with depression. A combination of self starvation and depressive symptoms put the group at one of the highest risks of dying from suicide. Studies reveal that anorexics are 50 times more likely to commit suicide than the average person.

It’s not quite clear whether depression leads to the development of an eating disorder, or the other way around. Certainly the malnourishment and being underweight that is caused by anorexia can have a negative effect on a person’s mood, causing them to experience symptoms of depression or other mood disorders.

The depression experienced by those who suffer from an eating disorder is unique in its own right. Feelings of inadequacy are quite common, as well as an obsession with being perfect that begins with their diet and spreads to the rest of their life. Underneath the perfectionism are feelings of depression, anxiety, and other emotional trauma that drives the eating disorder behaviors.

For those who binge eat, being overweight or obese can create or worsen symptoms of depression. As they fall deeper into the cycle of overeating and shame, their depression can become chronic. A binge eater will feel disgusted by their behavior and ashamed about the way they look, leading them to fall deeper into depression than ever before.

In order to determine if depression is a factor when treating an eating disorder, a doctor will ask their patient if they experience any of the following symptoms:

It’s relatively easy to diagnose depression on its own, but when combined with an eating disorder, it can be difficult to effectively treat both disorders. Antidepressants certainly help, especially among anorexic patients who have maintained a healthy weight and want to prevent a relapse. For binge eating disorder, doctors often use one or more medications to treat accompanying depression.

Cognitive behavioral therapy has also been shown to be very effective. This approach can change the way a patient thinks about food and can make it easier for them to establish healthier eating habits. Education about nutrition and healthy eating choices is also an effective mode of treatment. Nutrition classes as well as food diaries are used to establish new relationships with food. Patients are also encouraged to exercise regularly to feel good about themselves.