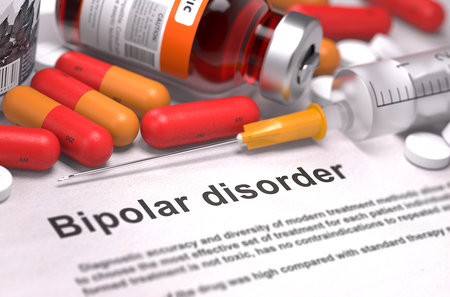 Bipolar disorder, which is characterized by dramatic swings in between “high” and “low” emotional states, can be an extremely stressful mental health disorder. The person suffering can find either being in a state hard to deal with and out of control.

However, through a combination of prescription medication and therapeutic intervention, many people with bipolar disorder are able to manage and stabilize their emotions and urges and live productive thriving lives. However, other people with the condition choose to self-medicate, turning to substance abuse as a way to temporarily numb emotions.

For example, a study published in JAMA Psychiatry in 2004 found that people with severe bipolar disorder are more than four times more likely to be frequent users of alcohol. Not only is this attempt at treatment inadequate, but it can also make the condition worsen in the long-term. Here are some specific drugs whose misuse can be made even more damaging with a co-occurring bipolar disorder.

After a long period of depression, the mania phase can be seen as a very positive experience, with a burst of energy, exuberance, and creativity. Although they often feel good to the person experiencing them, a manic phase can lead a person to make a dangerous decision, or push the body to unhealthy limits. Cocaine and methamphetamine are both substances that can be used to produce the feelings of a mania phase, sometimes making them stronger than they otherwise would be. This temporary high will be followed by a very strong “crash” into depression, that will be made even more severe, and longer-lasting, by the drugs. Furthermore, chronic stimulant abuse can alter the way in which the “highs” are felt, causing someone to feel anxious, agitated, or paranoid rather than happy.

Opium-like prescription painkillers and heroin can seem to blunt the more dramatic highs and lows of bipolar disorder, and a person may turn to these substances as a way to feel “normal” or less overwhelmed by their emotional roller-coaster. However, this short-term relief can cause serious problems later. After dependence and tolerance sets in, the drugs will no longer have the same effect, and so you will need more of the drug to have similar effects. Going without can then lead to even more unpredictable mood swings, and add the anxiety of severe addiction on top of your other emotional turmoil.

More worryingly, there is some evidence that antidepressants can trigger or worsen manic episodes. Many people may at first use antidepressants because their bipolar disorder gets misdiagnosed as depression, and so it is important to be upfront with your doctor and therapist, about your condition, so that both the depressive and manic episodes are receiving adequate treatment.

Severe bipolar disorder can produce psychotic symptoms, in which your view of reality become severely distorted in a way that reflects your severe mood. These reality distortions can radically affect your behavior and make it very difficult to function. Psychedelic substances can trigger flare-ups and make symptoms appear or worsen.

Alcohol is a depressant, and can bring on or intensify a depressed mood. Alcohol can also further lower inhibitions and reasoning ability, which can make engaging in risky behavior far more likely, and making it harder to bring your attention back to the present so you can focus on your healing. Alcoholism and bipolar disorder occur together in many people, and one can worsen and intensify the other. Alcohol use disrupts sleep, which can greatly intensify the likelihood of mania or depression. For this reason, it is generally recommended that people with bipolar disorder avoid drinking alcohol, especially at high amounts.

If you are having issues with both substance abuse and bipolar disorder, know that you don’t have to live with those struggles forever. As a whole person struggling with multiple interconnected issues, it is essential that your treatment plan take everything into consideration. Do not hesitate to take this step of hopefulness and healing today.