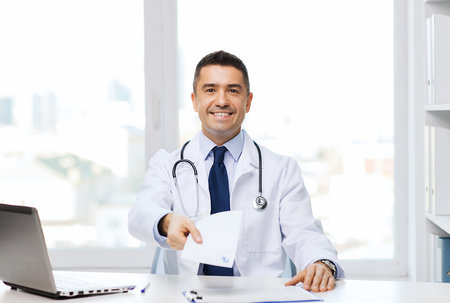 Prescription drugs, especially opiate painkillers, are quickly evolving into a serious epidemic in terms of misuse, dependence and addiction. As common as prescription drug dependence is becoming in the U.S., many primary doctors are still in the dark about the dangers and potential risks of providing patients with certain types of medication.

A recent study published in the Clinical Journal of Pain interviewed physicians and found that there were many common misconceptions among them that could prevent them from understanding how often these drugs are abused. If doctors are misinformed and lacking in important knowledge regarding prescription abuse it could be a contributing factor to the problem. The more doctors are aware of certain dangers, the more they can prevent their patients from abusing or becoming addicted to these types of medications.

Myths about Prescription Drugs
The recent survey included internists, family physicians and general practitioners who responded to issues regarding prescription drug abuse. All of the doctors in the survey understood and acknowledged that prescription drugs are a real problem in their communities but many of them help misconceptions about certain details.

Many were unaware that the most common method of prescription drug abuse is merely through pill-swallowing rather than crushing and snorting or injecting the drugs as it is often portrayed. As a result of this ignorance many of the doctors believed that pills made to be uncrushable are less addictive than their standard version.Nearly half of the doctors in the study endorsed uncrushable pills as a safer alternative because of their misconceptions about the methods of abusing prescription drugs.

The doctors in the study also believed that opioids entering the black market through legitimate providers are not a major cause for concern. In reality, the practice of bringing opioid painkillers into the black market is actually common at all levels of the pharmaceutical supply chain.

The Results of Misinformation
With some of the responses provided by the doctors, it became clear that many physicians may not understand important details about prescription drug abuse. Believing certain types of opioids to be safer than others may mean they are more likely to prescribe them, not realizing that all of these types of medications have the potential for addiction.

The authors of the study assert that physicians tend to overestimate the effectiveness of pain medication and underestimate their risks. While this problem is not the only reason for the high rates of prescription drug abuse, it is most likely a significant factor.

In spite of the doctor’s misunderstandings about prescription drugs, most are in support of policies that may help to combat abuse. Doctors in the survey said they would be in favor of measures such as requiring patients to sign contracts swearing not to abuse the drug, urine testing and creating a centralized database physicians can refer to before prescribing anything.

It seems clear that most physicians want to prevent abuse and understand that prescription drug addiction is a serious issue but simply need to be more educated about the reality of the problem. If doctors are more informed about how the drugs are abused, what types are addictive, and how these drugs normally reach abusers then they can be in a better position to reduce prescription drug abuse.

Obtaining prescription drugs quickly and easily is a major part of addiction and doctor’s offices are the source of these medications. As prescription addiction increases, people are experiencing the consequences of abuse with over 16,000 deaths in 2013 as a result of opioid painkillers. In the same year, nearly 2 million people were either addicted to or abused these drugs. With these high numbers it is important for physicians to play a more prominent role in reducing and preventing abuse throughout the U.S.