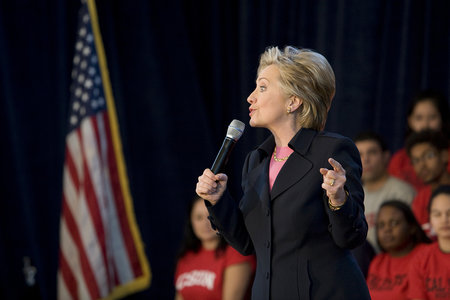 Clinton’s campaign trail has put the presidential candidate into contact with people whose stories of drug addiction and losing loved ones to overdoses have left an indelible mark. After hearing so many stories of the devastating effect the opiate epidemic has had on Americans, especially in the midwestern and New England states, Clinton has decided to make drug addiction a major part of her campaign. Clinton’s policy team has begun working on possible solutions to an epidemic that needs to be talked about.

During a campaign stop in Iowa last month, Clinton told supporters that there is a stigma associated with talking about addiction, especially heroin, that needs to be addressed. That stigma needs to end if any progress is going to be made. Clinton said she did not expect addiction to be one of her campaign’s main focuses when she first started running, but now realizes it’s an important issue for Americans, along with mental health issues and suicide.

A recent study done by the Centers For Disease Control shows that deaths related to heroin use have doubled in many states, with a 39 percent increase in deaths nationwide. This recent epidemic has prompted many to question the effectiveness of drug treatment in the U.S., as well as overall accessibility to effective treatment methods.

For example, addiction treatment using medications such as methadone or buprenorphine is viewed by medical professionals as valuable tools for opioid recovery, but the majority of people who need treatment are unable to receive these medications.

Clinton has been hosting several events to get discussions going on the topics of drug abuse and mental health. During these events, voters have been able to talk about how drug addiction has affected their communities in what Clinton has begun referring to as a “quiet epidemic”.

She admits that while the Affordable Care Act has encouraged progress by requiring health insurers to cover substance abuse and mental health treatment, there is still a lot of work to be done. Policy reform will need to happen at both state and national levels.

Clinton admits that there will be difficult work ahead because the current drug epidemic is not as obvious as it was in the past. From small towns to urban areas, addiction is having a devastating effect on people from all kinds of backgrounds, and not having access to the right kind of drug treatment is making the issue worse.

Clinton advisors have begun tackling substance abuse policies and will begin announcing them in the next few months. Some of the issues they’ll be dealing with include state funding for addiction treatment, changing the way insurance companies treat substance abuse treatment, focusing on addiction prevention and effective treatment instead of criminalizing, and addressing the reasons behind why there is a shortage of treatment nationwide. Ensuring adequate funding of treatment and increasing access to both substance abuse and mental health treatment will be other big concerns during the policy talks over the next few months.