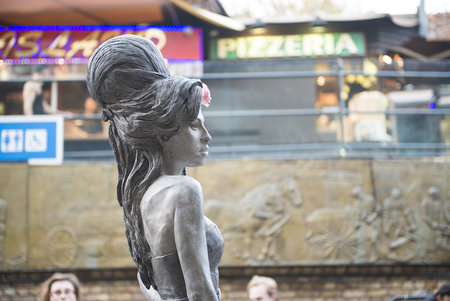 Amy Winehouse was an English singer-songwriter noted for a deep, soulful voice and songs influenced by eclectic genres included jazz, soul, and rhythm and blues. Her album Back to Black received five Grammy awards in 2008, and led to a great deal of popular success and critical acclaim.

Tragically, Amy’s tremendous talent did not protect her from a hard life of struggles with mental health, substance abuse, and addiction. In interviews she spoke of struggles with depression and self-harm, and her heavy drug use led to canceled performances and a great deal of media speculation.

Although she stopped using drugs in 2008, she turned to alcohol as a substitute addiction, in a pattern common to many people who continue to self-medicate and practice addictive habits, transitioning from one substance to another. In 2011, she died of alcohol poisoning at the age of 27, leading BBC music critic Gary Mulholland to lament, “we have lost the preeminent vocal talent of her generation.”

As a person with both deep talent and deep personal struggles, Amy’s life story attracted a lot of media attention and stigmatizing speculation. In an attempt to peel back the gossip and get at a respectful and truthful portrayal, filmmaker Asif Kapadia created the documentary Amy.

The film premiered at the 2015 Cannes Film Festival, and has been released to theaters in July, 2015. Asif has using previously unseen footage and interviews of the singer herself and more than 100 people who knew her to tell a more full story of both a troubled life and a musical genius, in a way that may hopefully inspire other people to seek help for their own lives.

A complex look at a complex life

The film has been praised through innovative styles of documentary making, such as combining Amy’s songs with pages from her journal, creating a window into her creative process. Asif sought to break through reductive gossip, showing how she was a deeply caring and charitable person and a creative powerhouse, who also had many deep personal struggles. Meeting people who cared about her introduces us to a person with intelligence and humor, someone Asif calls “so different” from “who everyone saw on stage.”

The film has attracted some controversy from its portrayal of some people close to Amy’s life. In particular, Mitch Winehouse, her father is shown as largely absent from her life until her career took off, and then was a controlling and attention-seeking presence, who pushed her into performing when it might have been better to take a break and get treatment for addiction recovery.

Mitch has since spoken out against the film, calling it inaccurate and unfair. There may be multiple sides to this story, and plenty of blame can be assigned to multiple enablers. There are no easy answers to who or what “causes” anyone’s addiction, but honest self-reflection and awareness of everyone involved is an essential part of helping someone realize their need for recovery.

Asif commented that when Amy Winehouse was alive, many people “liked the songs, but didn’t like her.” When Amy was alive, media portrayals frequently engaged in a double consciousness, celebrating the songs she created while mocking a life they didn’t fully understand.

Asif feels that a judgemental, stigmatizing culture made us “all complicit” in preventing Winehouse from getting the help she clearly needed. Her life is a heartbreaking story of how “many people tried to get to her, but they didn’t try hard enough.”

People struggling with addiction should not be reduced to their disease. It is common to simply judge people with drug or alcohol addiction as weak-willed, and this creates stigma that has prevented many people from getting the help they need. Learning how to see, accept, and love addicts as full human beings is an essential part of helping them get healing.

Hopefully, this opportunity to get a more full picture of Amy Winehouse’s life can be the start of new conversations on how to better understand and respond to addiction among the people we care about.